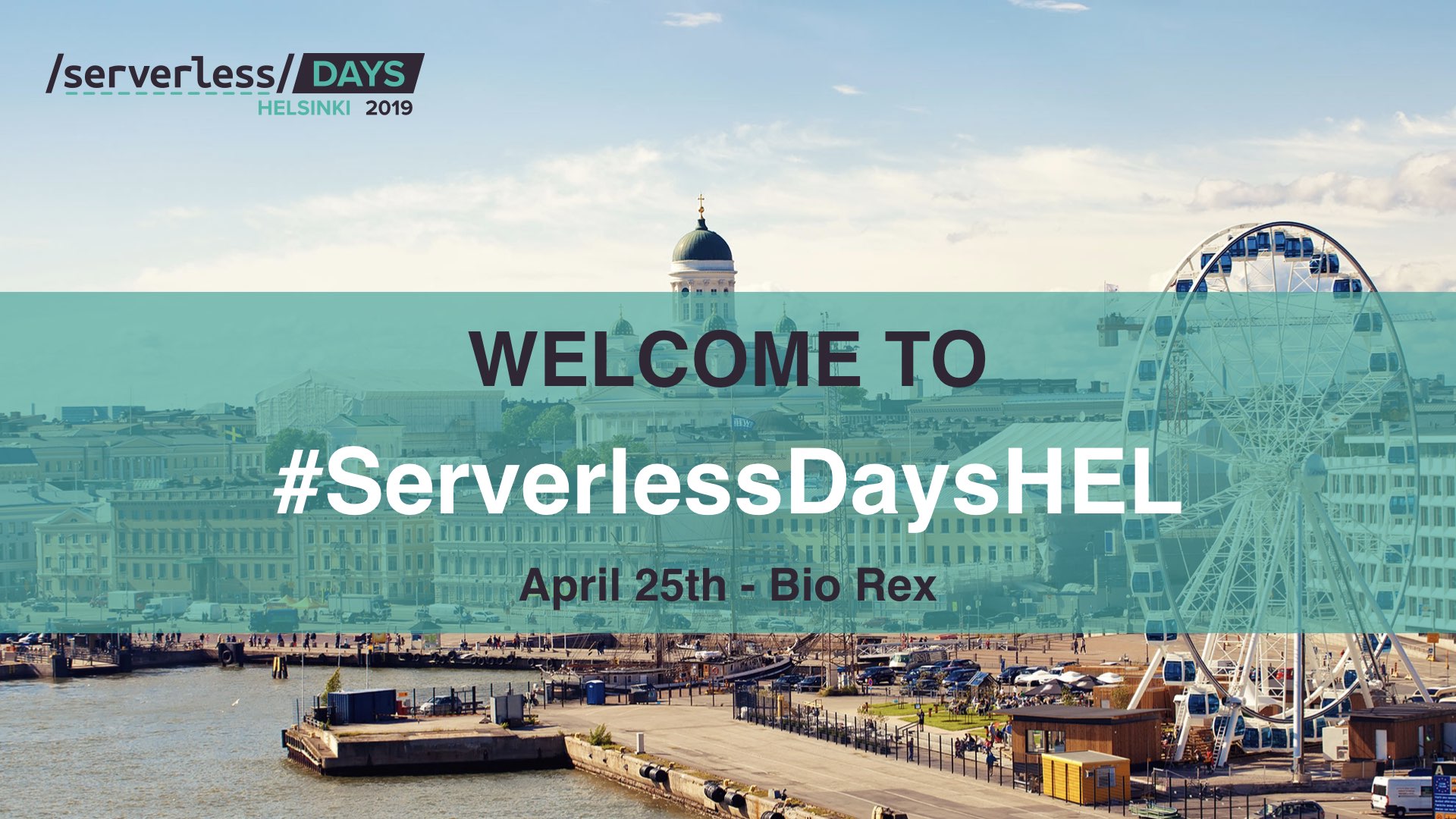 The first edition of ServerlessDays Helsinki was hosted on the 25th of April 2019 in BioRex. This is my experience as one of the organizers of the event and what we learned during the process.

ServerlessDays Helsinki (https://helsinki.serverlessdays.io/) is part of a series of global conferences called ServerlessDays (https://serverlessdays.io/), ex JeffConf. This idea was born a couple of years ago in London and it has become a massive phenomenon in the serverless world. The idea behind ServerlessDays confs is that they are one track, one-day conferences organized by the local community. This makes the tickets accessible and the talks agnostic of cloud providers or third-party products.

Today at the #ServerlessDaysHEL event. Organizing team on site at the break of dawn! pic.twitter.com/llO7uTZwi8

I returned to Helsinki with that purpose and started gathering some people I knew to organize this event. Luckily as an organizer of the AWS User Group in Helsinki (https://www.meetup.com/awsfin), I knew many AWS users and people that were willing to participate, but I also wanted some other clouds experts to be involved in the event, so I recruited a couple of experts in Azure and GCP.

By the end of the summer, we had the team ready and we hosted the first meeting. We were all very eager to get this started, we had a lot of plans and a lot of wishes for the event. Nothing really happened after that first encounter. After a month we hosted another meeting, and again nothing happened. And a third one… First, we wanted to host the event in October, then in December, then in February… and the date keeps on postponing.

The turning point was when one of the organizers talked to their company and got the first sponsorship. And also they committed to be the company that will help with the handling of the payments and bookings. In addition, as they were committing to this one of their experts in organizing events joined our organizing team. The moment that happened things started to move very fast!

A few days later as this happened the location was found and the date was set. From there we had a little over 2 months to get everything ready!

From there it was “easy”, we had had so many talks before about the type of event we were envisioning that we had quite a good team. We open the call for papers right away. Wishing that we have enough talks, it was only for a month open. That is a very short period of time for a call for papers to be open.

And then we started to hunt for some sponsors. By the next meeting when we had the first sponsor in, most of the companies of the other organizers have jumped in as they wanted to sponsor the event. So we decided not to look for any more sponsors.

We put the tickets to sell as soon as we have the website up. We had 2 months to sell 200 tickets. We decided that we didn’t want to host a massive conference the first time. Our venue allowed us to have 500 persons listening to the talks. But the logistics for a 500 person conference are quite different for a 200 person one. The first weeks the tickets were not selling very well. Later I spoke with other organizers of ServerlessDays conf and they told me that they usually sold out before the event and most of the tickets are sold on the two weeks previous to the event. Luckily that happened, we were quite worried at the beginning that we won’t have enough participants, but 3 days before the event we were sold out.

The call for papers was great, we received in one month over 70 proposals. However, most of the proposals were from people abroad and we wanted to have more than 50% of the talks from local talent. And also from the 70 proposals, only 4 were from women.

We had a few days to choose all the talks and to balance out all the topics. I knew that our community likes to hear about war stories, real stories of companies going serverless. But we couldn’t make a whole conference of that. So we mix it up with interesting more theoretical topics where people could get some inspiration.

The two months went very fast and the day of the conference approached. I was quite nervous that morning never organized a conference before. But as soon as I arrived at the venue I relaxed again, I saw people coming in and having a good time. Speakers were happy, sponsors were happy and we organizers were happy.

So, in the end, it was a great conference. I want to thank the sponsors for letting this happen: Accenture, Cybercom, Microsoft, Nitor, and Nordcloud. And to the organizers that make this happen.

Now for those interested in organizing a conference here are some of my lessons learned.

Hottest T-shirts on the block available at the check-in counter #ServerlessDaysHEL pic.twitter.com/OUsZrEO5th